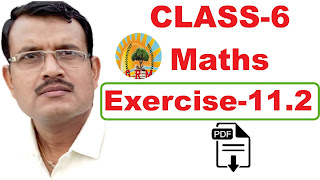 Use of Variables in Common Rules
Let us now see how certain common rules in mathematics that we have already
learnt are expressed using variables.
Rules from geometry
We have already learnt about the perimeter of a square and of a rectangle in
the chapter on Mensuration. Here, we go back to them to write them in the
form of a rule.
1. Perimeter of a square
We know that perimeter of
any polygon (a closed figure made up of 3 or more
line segments) is the sum of the lengths of its sides.
A square has 4 sides and they are equal in length
Therefore,
The perimeter of a square = Sum of the lengths of the
sides of the square
= 4 times the length of a side of the square
= 4 × l = 4l.
Thus, we get the rule for the perimeter of a square. The use of the variable
l allows us to write the general rule in a way that is concise and easy to
remember.
We may take the perimeter also to be represented by a variable, say p.
Then the rule for the perimeter of a square is expressed as a relation between
the perimeter and the length of the square, p = 4l
2. Perimeter of a rectangle
We know that a rectangle
has four sides. For example, the rectangle ABCD
has four sides AB, BC, CD and DA. The opposite
sides of any rectangle are always equal in length.
Thus, in the rectangle ABCD, let us denote by l, the
length of the sides AB or CD and, by b, the length
of the sides AD or BC. Therefore,
Perimeter of a rectangle= length of AB + length of BC + length of CD+ length of AD
= 2 × length of CD + 2 × length of BC = 2l + 2b
The rule, therefore, is that the perimeter of a rectangle = 2l + 2b
where l and b are respectively the length and breadth of the rectangle.
Discuss what happens if l = b.
If we denote the perimeter of the rectangle by the variable p, the rule for
the perimeter of a rectangle becomes p = 2l + 2b
Note: Here, both l and b are variables. They take on values
independent of each other. i.e. the value one variable takes does not
depend on what value the other variable has taken.
In your studies of geometry you will come across several rules and formulas
dealing with perimeters and areas of plane figures, and surface areas and
volumes of three-dimensional figures. Also, you may obtain formulas for the
sum of internal angles of a polygon, the number of diagonals of a polygon
and so on. The concept of variables which you have learnt will prove very
useful in writing all such general rules and formulas.
4. Commutativity of multiplication of two numbers
We have seen in the chapter on whole numbers that for multiplication of
two numbers, the order of the two numbers being multiplied does not matter.
For example,
4 × 3 = 12, 3 × 4 = 12
Hence, 4 × 3 = 3 × 4
This property of numbers is known as commutativity of multiplication
of numbers. Commuting (interchanging) the order of numbers in
multiplication does not change the product. Using variables a and b as in the
case of addition, we can express the commutativity of multiplication of two
numbers as a × b = b × a
Note that a and b can take any number value. They are variables. All the
special cases like
4 × 3 = 3 × 4 or 37 × 73 = 73 × 37 follow from the general rule.
5. Distributivity of numbers
Suppose we are asked to calculate 7 × 38. We obviously do not know the
table of 38. So, we do the following:
7 × 38 = 7 × (30 + 8) = 7 × 30 + 7 × 8 = 210 + 56 = 266
This is always true for any three numbers like 7, 30 and 8. This property is
known as distributivity of multiplication over the addition of numbers.
By using variables, we can write this property of numbers also in a general
and concise way. Let a, b and c be three variables, each of which can take any
number. Then, a × (b + c) = a × b + a × c
Properties of numbers are fascinating. You will learn many of them in your
study of numbers this year and in your later study of mathematics. Use of
variables allows us to express these properties in a very general and concise
way.
Answers