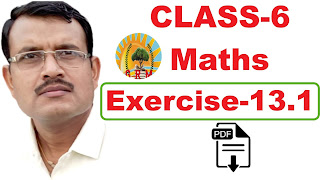 Introduction:-
Symmetry is quite a common term used in day to day life. When we see
certain figures with evenly balanced proportions, we say, “They are
symmetrical”.
These pictures of architectural marvel are beautiful
because of their symmetry.
Suppose we could fold a picture in half such that the
left and right halves match exactly then the picture is said
to have line symmetry . We can see that the two
halves are mirror images of each other. If we place a mirror
on the fold then the image of one side of the picture will
fall exactly on the other side of the picture. When it happens,
the fold, which is the mirror line, is a line of symmetry (or
an axis of symmetry) for the picture.
Tajmahal (U.P.) Thiruvannamalai (Tamil Nadu)
The shapes you see here are symmetrical. Why?
When you fold them along the dotted line, one half of
the drawing would fit exactly over the other half.
How do you name the dotted line in the figure?
Where will you place the mirror for having the image
exactly over the other half of the picture?
The adjacent is not symmetrical.
Can you tell ‘why not’?
Making Symmetric Figures : Ink-blot Devils
Take a piece of paper. Fold it in half.
Spill a few drops of ink on one half side.
Now press the halves together.
What do you see?
Is the resulting figure symmetric? If yes, where is
the line of symmetry? Is there any other line along which
it can be folded to produce two identical parts?
Try more such patterns.
Inked-string patterns
Fold a paper in half. On one half-portion, arrange short lengths of string
dipped in a variety of coloured inks or paints. Now press the two halves.
Study the figure you obtain. Is it symmetric? In how many ways can it be
folded to produce two identical halves?
List a few objects you find in your class
room such as the black board, the table, the
wall, the textbook, etc. Which of them are
symmetric and which are not? Can you identify
the lines of symmetry for those objects which
are symmetric?
Answers