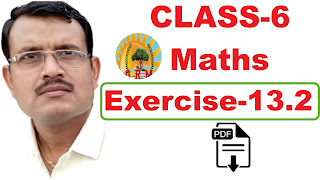 Introduction:-
Figures with Two Lines of Symmetry
A kite
One of the two set-squares in your instrument box has angles of measure 30°,
60°, 90°.
Take two such identical set-squares. Place them side by side
to form a ‘kite’, like the one shown here.
How many lines of symmetry does the shape have?
Do you think that some shapes may have more than one line
of symmetry?
A rectangle
Take a rectangular sheet (like a post-card). Fold it once lengthwise so that one
half fits exactly over the other half. Is this fold a line of symmetry? Why?
Open it up now and
again fold on its
width in the same
way. Is this second
fold also a line of
symmetry? Why?
Do you find that these two lines are the lines of
symmetry?
A cut out from double fold
Take a rectangular piece of paper. Fold
it once and then once more. Draw
some design as shown. Cut the shape
drawn and unfold the shape. (Before
unfolding, try to guess the shape you
are likely to get).
How many lines of symmetry
does the shape have which has been
cut out?
Create more such designs.
Do This
1st fold 2nd fold
Form as many
shapes as you
can by
combining two
or more set
squares. Draw
them on squared
paper and note
their lines of
symmetry.
Take a square piece of paper. Fold it into half vertically,
fold it again into half horizontally. (i.e. you have folded
it twice). Now open out the folds and again fold the
square into half (for a third time now), but this time
along a diagonal, as shown in the figure. Again open it
and fold it into half (for the fourth time), but this time
along the other diagonal, as shown in the figure. Open
out the fold.
How many lines of symmetry does the shape have?
We can also learn to construct figures with two lines of symmetry starting
from a small part as you did in Exercise 13.1, question 4, for figures with one
line of symmetry.
1. Let us have a figure as shown alongside.
2. We want to complete it so that we get a figure
with two lines of symmetry. Let the two lines
of symmetry be L and M.
3. We draw the part as shown to get a figure having
line L as a line of symmetry.
3 lines of symmetry
for an equilateral triangle
4. To complete the figure we need it to be
symmetrical about line M also. Draw the
remaining part of figure as shown.
This figure has two lines of symmetry i.e. line L
and line M.
Try taking similar pieces and adding to them so
that the figure has two lines of symmetry.
Some shapes have only one line of symmetry; some have two lines of
symmetry; and some have three or more.
Can you think of a figure that has six lines of symmetry?
Answers