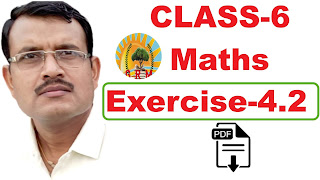 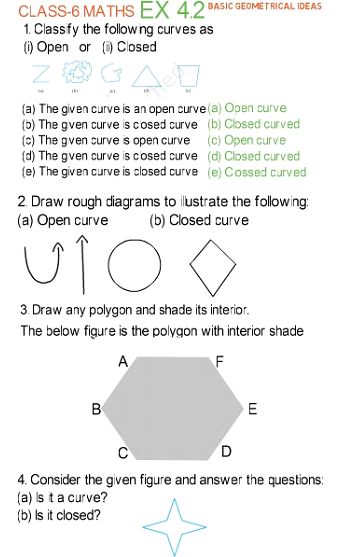 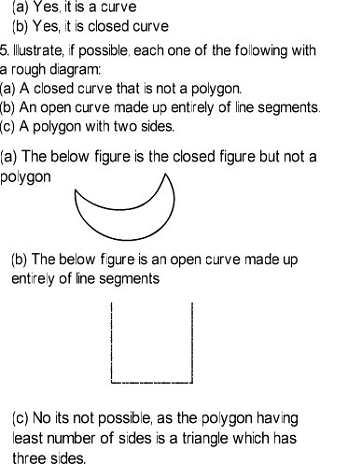 A Line:
Imagine that the line segment from A to B (i.e. AB) is extended beyond A in
one direction and beyond B in the other
direction without any end (see figure). You
now get a model for a line.
Do you think you can draw a complete picture of a line? No. (Why?)
A line through two points A and B is written as AB.
It extends indefinitely in both directions. So it contains a
countless number of points. (Think about this).
Two points are enough to fix a line. We say ‘two
points determine a line’.
The adjacent diagram (Fig 4.3) is that of a line
PQ written as PQ. Sometimes a line is denoted by
Curves
Have you ever taken a piece of paper and just doodled? The pictures that
are results of your doodling are called curves.
You can draw some of these drawings without lifting the pencil from the paper
and without the use of a ruler. These are all curves.
‘Curve’ in everyday usage means “not straight”. In Mathematics, a curve
can be straight like the one shown in fig 4.10 (iv).
Observe that the curves (iii) and (vii)  cross themselves,
whereas the curves (i), (ii), (v) and (vi) do not. If a curve does
not cross itself, then it is called a simple curve.
Draw five more simple curves and five curves that are not simple.
Consider these now (Fig 4.11).
What is the difference between these
two? The first i.e. Fig 4.11 (i) is an
open curve and the second i.e. Fig 4.11(ii)
is a closed curve. Can you identify some
closed and open curves from the figures
(i), (ii), (v), (vi)? Draw five curves
each that are open and closed.
Position in a figure
A court line in a tennis court divides it into three parts : inside the line, on the
line and outside the line. You cannot enter inside without crossing the line.
A compound wall separates your house
from the road. You talk about ‘inside’ the
compound, ‘on’ the boundary of the
compound and ‘outside’ the compound.
In a closed curve, thus, there are three parts.
(i) interior (‘inside’) of the curve
(ii) boundary (‘on’) of the curve and
(iii) exterior (‘outside’) of the curve.
In the figure 4.12, A is in the interior, C is in the exterior and B is on
the curve.
The interior of a curve together with its boundary is called its “region”.
Polygons:-
So, a figure is a polygon if it is a simple closed figure made up entirely
of line segments. Draw ten differently shaped polygons.
Answers