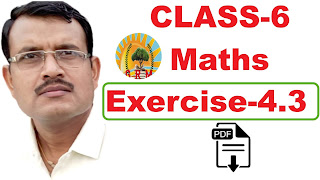 Angles:-
Angles are made when corners
are formed.
Here is a picture
where the top of a box is like a
hinged lid. The edges AD of the
box and AP of the door can be
imagined as two rays AD. These two rays have a
common end point A. The two rays here together are said to form an angle.
An angle is made up of two rays starting from a common end point.
The two rays forming the angle are called the arms or sides of the angle.
The common end point is the vertex of the angle.
(a) (b) (c) (d) (e)
This is an angle formed by rays OP
How can we name this angle? We can simply say
that it is an angle at O. To be more specific we
identify some two points, one on each side and the
vertex to name the angle. Angle POQ is thus a better
way of naming the angle. We denote this by
∠POQ.
Think, discuss and write
Look at the diagram.What is the name
of the angle? Shall we say∠P ? But then which
one do we mean? By ∠P what do we mean?
Is naming an angle by vertex helpful here?
Why not?
By ∠P we may mean ∠APB or ∠CPB or even
∠APC! We need more information.
Note that in specifying the angle, the vertex is always written as the
middle letter.
Now shade in a different colour the portion
of the paper bordering BC
The portion common to both shadings is
called the interior of ∠ABC. (Note
that the interior is not a restricted area; it
extends indefinitely since the two sides extend
indefinitely).
In this diagram , X is in the
interior of the angle, Z is not in the interior but
in the exterior of the angle; and S is on the
∠PQR . Thus, the angle also has three parts
associated with it.
Answers