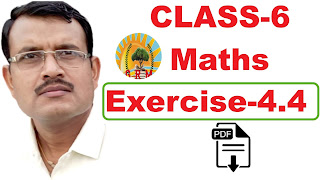 Triangles
A triangle is a three-sided polygon.
In fact, it is the polygon with the least
a number of sides.
Look at the triangle in the diagram
We write ∆ABC instead of
writing “Triangle ABC”.
In ∆ABC, how many sides and how
many angles are there?
The three sides of the triangle are
AB, BC and CA. The three angles are
∠BAC, ∠BCA and ∠ABC. The points
AB and C are called the vertices of
the triangle.
Being a polygon, a triangle has an
exterior and an interior
What have we discussed?
1. A point determines a location. It is usually denoted by a capital letter.
2. A-line segment corresponds to the shortest distance between two points. The
the line segment joining points A and B is denoted by AB.
Do This
AB and BA denote the same line segment.
3. A-line is obtained when a line segment like AB is extended on both sides
indefinitely; it is denoted by AB
or sometimes by a single small letter like l.
4. Two distinct lines meeting at a point are called intersecting lines.
5. Two lines in a plane are said to be parallel if they do not meet.
6. A ray is a portion of line starting at a point and going in one direction endlessly.
7. Any drawing (straight or non-straight) done without lifting the pencil may be called a curve. In this       sense, a line is also a curve.
8. A simple curve is one that does not cross itself.
9. A curve is said to be closed if its ends are joined; otherwise it is said to be open.
10. A polygon is a simple closed curve made up of line segments. Here,
(i) The line segments are the sides of the polygon.
(ii) Any two sides with a common end point are adjacent sides.
(iii) The meeting point of a pair of sides is called a vertex.
(iv) The end points of the same side are adjacent vertices.
(v) The join of any two non-adjacent vertices is a diagonal.
11. An angle is made up of two rays starting from a common end point.
An angle leads to three divisions of a region:
On the angle, the interior of the angle and the exterior of the angle.
12. A triangle is a three-sided polygon.
Answers