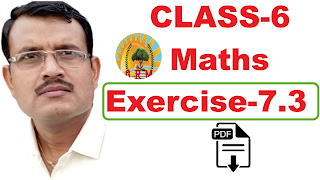 Simplest Form of a Fraction
Given the fraction
36
54, let us try to get an equivalent fraction in which the
the numerator and the denominator have no common factor except 1.
How do we do it? We see that both 36 and 54 are divisible by 2.
and 27 also have common factors other than one.
The common factors are 1, 3, 9; the highest is 9.
Therefore, 18
Now 2 and 3 have no common factor except 1; we say that the fraction
is in the simplest form.
A fraction is said to be in the simplest (or lowest) form if its numerator
and denominator has no common factor except 1.
The shortest way
The shortest way to find the
the equivalent fraction in the
the simplest form is to find the
HCF of the numerator and
the denominator, and then divide
both of them by the HCF.
A Game
The equivalent fractions given here are quite
interesting. Each one of them uses all the digits
from 1 to 9 once!
Try to find two more such equivalent fractions.
The HCF of 36 and 24 is 12.
Therefore, 36
24 = 36 12
Thefraction 3
2 is in the lowest form.
Thus, HCF helps us to reduce a fraction to
its lowest form.
Like Fractions
Fractions with same denominators are called like fractions.
Thus, 1
15 , , , are all like fractions. Are 7
28 like fractions?
Their denominators are different. Therefore, they are not like fractions.
They are called unlike fractions.
Write five pairs of like fractions and five pairs of unlike fractions.
Comparing Fractions
Sohni has 3 1
2 rotis in her plate and Rita has 2 3
4 rotis in her plate. Who has
more rotis in her plate? Clearly, Sohni has 3 full rotis and more and Rita has
less than 3 rotis. So, Sohni has more rotis.
Consider 1
2 and 1
3 as shown in Fig. 7.12. The portion of the whole
corresponding to 1
2 is clearly larger than the portion of the same whole
corresponding to 1
3
So 1
2 is greater than 1
3
But often it is not easy to say which
one out of a pair of fractions is larger. For
example, which is greater, 1
4 or
3
10 ? For
this, we may wish to show the fractions
using figures (as in fig. 7.12), but drawing figures may not be easy especially
with denominators like 13. We should therefore like to have a systematic
procedure to compare fractions. It is particularly easy to compare like fractions.
We do this first.
Try These
1. You get one-fifth of a bottle of
juice and your sister gets one-
third of the same size of a bottle
of juice. Who gets more?
Answers