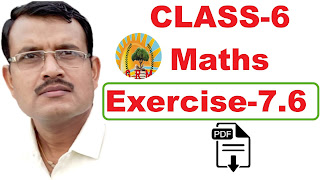 How do we add or subtract mixed fractions?
Mixed fractions can be written either as a whole part plus a proper fraction or
entirely as an improper fraction. One way to add (or subtract) mixed fractions
is to do the operation seperately for the whole parts and the other way is to
write the mixed fractions as improper fractions and then directly add (or
subtract) them.
Adding and subtracting fractions
We have learnt to add and subtract like fractions. It is also not very difficult to
add fractions that do not have the same denominator. When we have to add or
subtract fractions we first find equivalent fractions with the same denominator
and then proceed.
Subhash had learnt about fractions in
Classes IV and V, so whenever possible
he would try to use fractions. One
occasion was when he forgot his lunch
at home. His friend Farida invited him
to share her lunch. She had five pooris
in her lunch box. So, Subhash and
Farida took two pooris each. Then
Farida made two equal halves of the
fifth poori and gave one-half to Subhash
and took the other half herself. Thus,
both Subhash and Farida had 2 full
pooris and one-half poori.
Where do you come across situations with fractions in
your life?
Subhash knew that one-half is written as
1
2 . While
eating he further divided his half poori into two equal
parts and asked Farida what fraction of the whole poori
was that piece?
Without answering, Farida also divided her portion of the
half puri into two equal parts and kept them beside Subhash’s
shares. She said that these four equal parts together make
A Fraction
Let us recapitulate the discussion.
A fraction means a part of a group or of a region.
5
12 is a fraction. We read it as “five-twelfths”.
What does “12” stand for? It is the number of equal parts
into which the whole has been divided.
What does “5” stand for? It is the number of equal parts which have been
taken out.
Here 5 is called the numerator and 12 is called the denominator.
Name the numerator of
3
7 and the denominator of
3
Play this Game
You can play this game with your friends.
Take many copies of the grid as shown here.
Consider any fraction, say
Each one of you should shade
2 of the grid.
Proper Fractions
You have now learnt how to locate fractions on a number line. Locate the fractions
8 , , , , on separate number lines.
Does any one of the fractions lie beyond 1?
All these fractions lie to the left of 1as they are less than 1.
In fact, all the fractions we have learnt so far are less than 1. These are
proper fractions. A proper fraction as Farida said (Sec. 7.1), is a number
representing part of a whole. In a proper fraction the denominator shows the
number of parts into which the whole is divided and the numerator shows the
number of parts which have been considered. Therefore, in a proper fraction the
numerator is always less than the denominator.
Answers